Most people in the wine trade love a beer too, so it was perhaps only a matter of time until we launched our now much-loved ale, Old Wallop.

Back in 1979, we leased an old Lyons corner house (where the waiters and waitresses were famously known as “nippies” because they “nipped around”) on St. Martin’s Le Grand. At 7,000 square feet, it was nearly three times larger than our biggest premises and we thought long and hard about how to use the space. A decision was made to create two premises, one focusing on wine, The City Vaults, and the other an “Ale and Port house” called The City Pipe (entrance on Foster Lane) which would serve our own beer by the half gallon jug or pint pewter tankard.

It was our fourth generation chairman John Davy, who came up with the name Old Wallop. “Wallop” was traditionally a name given to an inferior beer, but John Davy wanted Old Wallop to be premium – the best that you could get – and we began serving it from pewter tankards and half gallon (four pints), copper jugs. At the time, no one else was serving beer in jugs, but customers loved it because it meant they could relax and enjoy their beer and food without having to go back to the bar after every pint.

You can still enjoy Old Wallop in a pewter tankard in many of our wine bars across London! 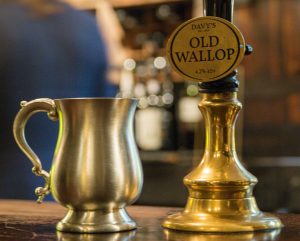